Unique places of Russia, which you hardly heard: Kucherlinskie lakes

Most of the population of Russia lives on the plains. Mountains from us are usually not just far, but very far away. Meanwhile, there are more than 2,000 mountain peaks in our country.

The Greater Caucasus, the Urals, Sayans, Kamchatka – ridges and hills, like a fence, surround the southern and eastern plains. 72 peaks in Russia have a height of more than 4,000 m. The tallest of them is Elbrus (5,642 m). One of the most beautiful mountain ranges is Altai. Its complex system of ridges stretches almost 2,000 km and in some places reaches 4,500 m above sea level.

Hundred thousand of years ago the Earth yet did not have a relief usual for us. But with tectonic fractures and glacial gatherings, as rough strokes, nature drew objects that we are now looking at with a sinking heart.

One of them is Kucherlinskie lakes. They are located in the Altai mountains, in the upper reaches of the Kucherla river (the tributary of Katun). Administratively these places belong to the Ust-Koksinsky district of the Altai Republic.

The group of Kucherlinsky lakes includes three water bodies: the Big, Upper and Lower Lakes. The last two are not as large as the first.

Both are located on the north side of the Katun Ridge. On its slopes there are about 400 glaciers, as well as dozens of lakes and waterfalls of glacial origin. The pearl among them is the Great Kucherlinsky lake. 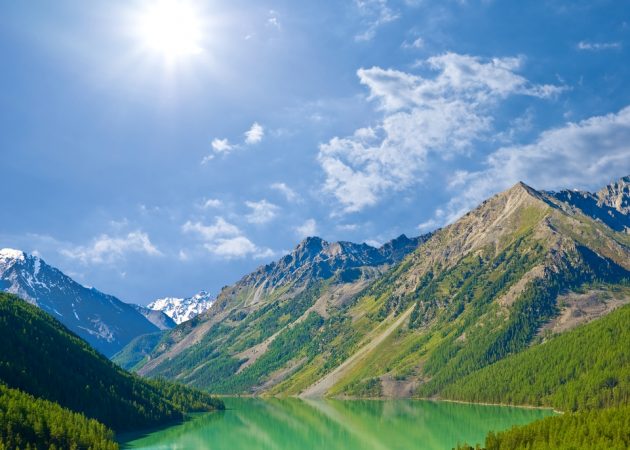 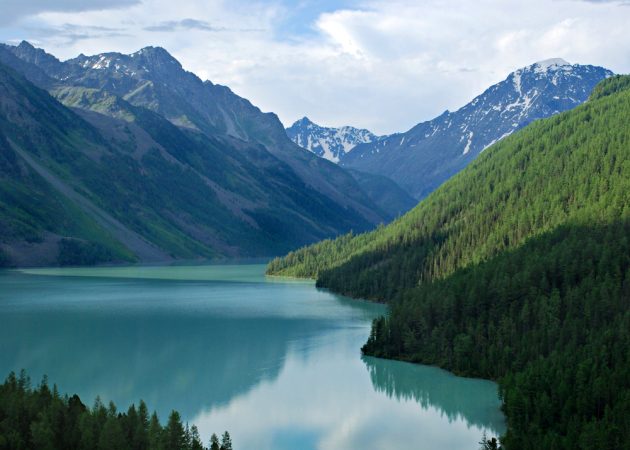 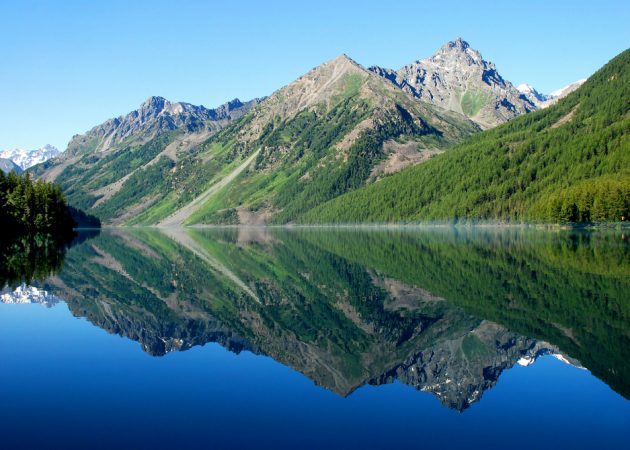 It’s amazing that such a large reservoir is not in the plain, but in the mountains. From the west and east, the Great Kucherlinskoye Lake, like a cliff, is surrounded by mountain peaks reaching at times 3,000 m.

In the south, the lake rests on the river Kucherlu, and in the north – in the glacial moraine, the place where the glacier, which has pierced the earth, stopped.

Morena is a complex glacial deposit, which is a mixture of clay, crushed stone, boulders brought by the glacier during the movement.

The hollow remaining from the movement of the glacier is now the bottom of the Great Kucherlinsky Lake. Its average depth is about 30 m, but in the deepest places it reaches almost 55 m.

The color of the water also speaks of the glacial origin of the lake. Matte-turquoise shade creates a mineral suspension, which almost never settles to the bottom. However, depending on the weather, the lake can change color – sometimes it becomes dark gray.

The local climate does not spoil the heat: the average temperature in July on the Great Kucherlinsky Lake is about +14 ºС. At night, there are frosts even in the summer.

But neither the inaccessibility, nor the unflattering weather does not stop those who dream of seeing Kucherlinskie lakes.

What to do in the Kucherlinsky lakes?

The beauty of the Altai Mountains is not for tourists who are used to comfort. The visiting season of the Kucherlin lakes lasts from May to mid-September. You can reach them on foot or by horse. Horse riding takes a few hours (about this later), and on foot – about two or three days.

If you decide to look at the Kucherlinskie lakes, remember: you will have a serious hike with heavy backpacks, cold nights and long transitions. The route is quite difficult: almost always have to go uphill, it often happens rains, blurring the trail. You need to be ready for wet clothes and bothersome insects. But fans of campaigns, no matter what, will be satisfied. The unique Altai nature and fresh air more than pay off all the difficulties.

The nature of the Kucherlinsky lakes is really unique. This is confirmed by the fact that they are located in the territory of the Belukha nature park, established in 1997.

A natural park is a part of the natural landscape that is under the jurisdiction of a subject of the Russian Federation. To visit him, you do not need to obtain special permissions.

In natural parks there are special protection regimes. So, at the foot of the Belukha (the highest mountain Katunsky ridge – 4,509 m) there are snow leopards – snow leopards. These graceful predators are listed in the Red Book of Russia, so hunting for them is prohibited.

But you can get permission to hunt for Siberian mountain goats, who come to graze on the local alpine meadows.

Altaic alpine meadows are not an oxymoron at all. The shores of the Great Kucherlinsky Lake are embraced by mountain peaks, between which stretch picturesque mountain meadows. Recent scientists are divided into Alpine and subalpine depending on the altitude zonality.

When traveling to Kucherlinsky lakes, you can enjoy the modest beauty of mountain flowers, and also collect honeysuckle and cranberries (there are many berries in the vicinity of the lakes).

Of the fauna, except goats, you can meet more gophers and pischuh. The latter are especially numerous. Be careful when you get up for the night: these animals are very agile, they often gnaw backpacks of tourists in search of something tasty. 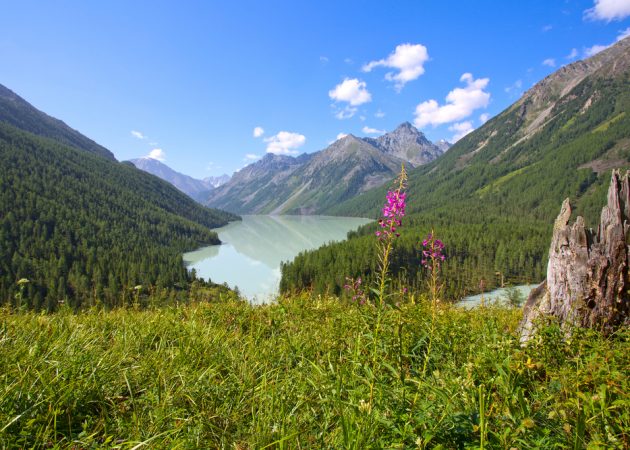 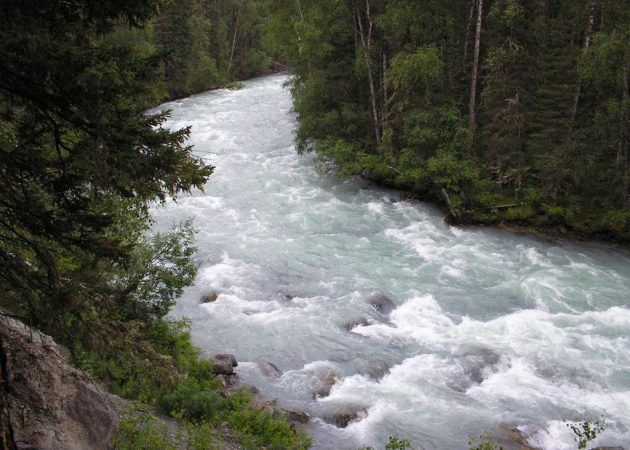 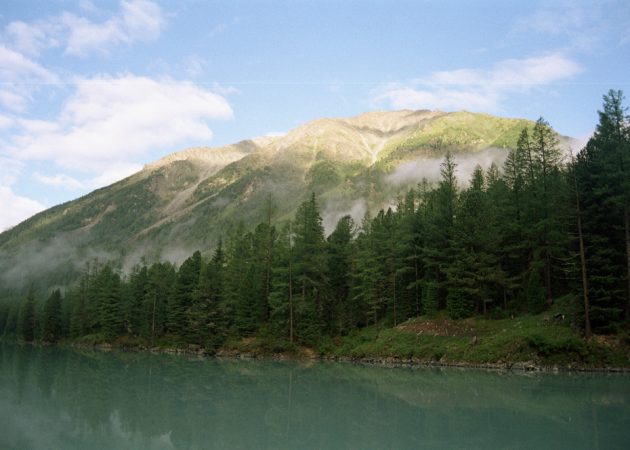 But the main wealth of the Kucherlin lakes, of course, is fish! There are grayling and mikizha (rainbow trout). Fishermen will be able to enjoy their favorite pastime, and those who have never fished, finally try. After all, what can be better than fry freshly caught (own!) Fish?

Trekking to Kucherlinsky lakes is an excellent pastime for those who like active recreation. But it requires a lot of physical strength and endurance.

If you prefer a tent and a sleeping bag, prefer a comfortable bed, do not worry – recreation resources in the natural park “Belukha” are also available. So, near the village of Tungur there are several recreation centers offering tourists not only a comfortable night’s lodging, but also a transfer from / to major cities and excursions to the lakes.

In the immediate vicinity of the Great Kucherlinsky Lake there is the same tourist camp. There guests, in addition to the natural beauties that go “by default”, are offered all kinds of entertainment: a sauna, hire motor and catamarans, horseback riding, etc.

By the way, horse tours to Kucherlinsky lakes are a very common service for Altai guides and travel agencies. At the same time, the Great Kucherlin Lake is usually only one of the stops. Tourists are offered 2-5-day routes to several places of interest (Lake Darashkol and Akkem, Stone Town, Koni-Air Falls, etc.). 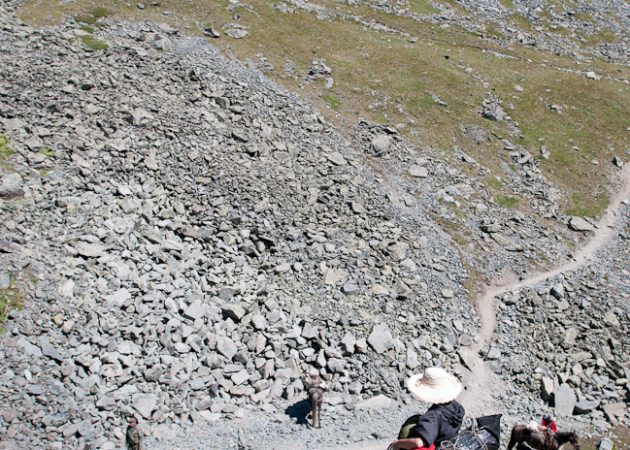 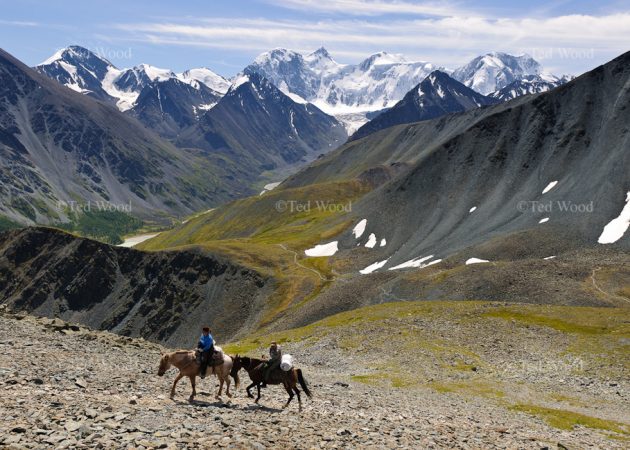 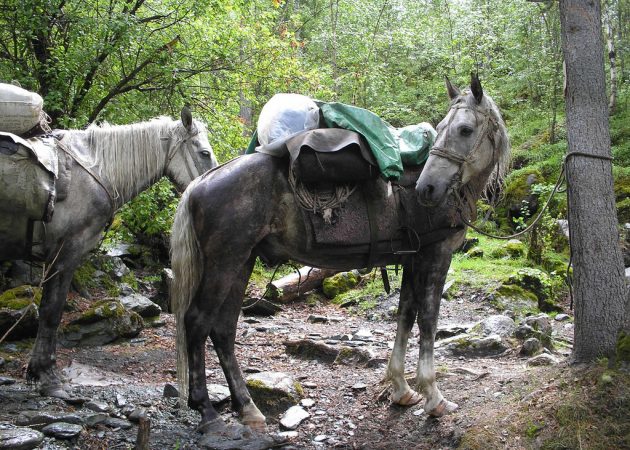 How to get to Kucherlinsky lakes?

Attention! Trekking to Kucherlinsky lakes is a serious event. If you have never been to Altai, then it is better to buy a tour in an agency or hire a guide (residents of the village of Tungur willingly agree to be accompanied).

The nearest settlements to the Kucherlinsky lakes (about 40 km) are the villages of Kucherla and Tungur. The first is almost abandoned, therefore all tourist routes, as a rule, begin from Tungur. Therefore, the number one task is to get to it. There are two options.

You can get to Tungur via public transport from Gorno-Altaisk (the capital of the Altai Republic). In the summer, the bus runs every Tuesday, Thursday and Saturday. It will take almost 10 hours.

Back from Tungur to Gorno-Altaisk the bus goes on Wednesdays, Fridays and Sundays.

More information about the timetable can be found here.

By car, the route to Tungur can be laid from nearby major cities:

Nearby there is the M52.

In summer, before Tungur, as well as from the village to the Great Kucherlinsky Lake, you can fly by helicopter. True, pleasure is not cheap.

Why should you see Kucherlinsky lakes?

Imagine: early morning, the rays of the sun barely break through the teeth of rocks, overgrown with cedar. You leave the tent and breathe in the invigorating air. Around – silence. Only somewhere in the meadows is sung by an unknown bird and the sound of a mountain river drones silently. You come to the matt turquoise lake. It is smooth, like glass; it seems, you will touch – it will scatter on thousands of fragments … 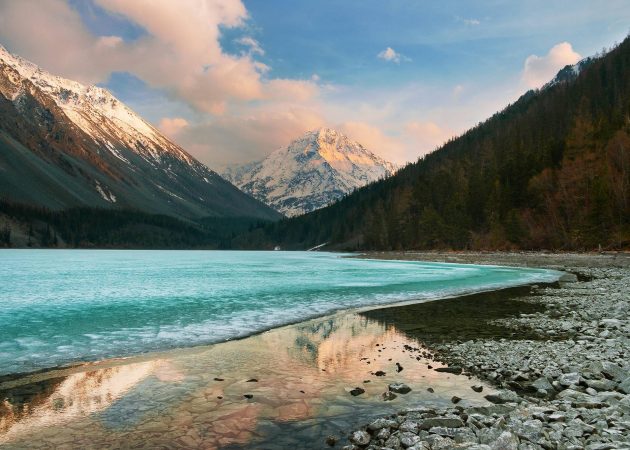 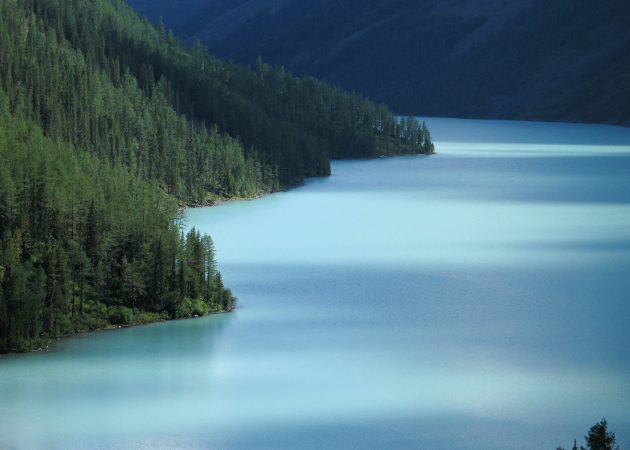 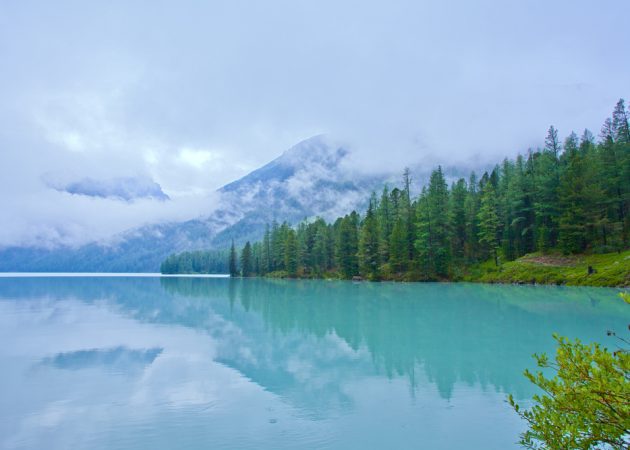 Sounds like a fairy tale, is not it? Kucherlinsky lakes are a rare natural object creating a sense of unreality. Life in such places flows according to its own laws: not people dictate rules to nature, and it is to them. Looking at the clouds reflected in the blue surface of the Kucherlinsky Lake, the time, the value of things and their place in the world are differently felt. If you want to learn more about yourself and people, go on a trip to Altai.